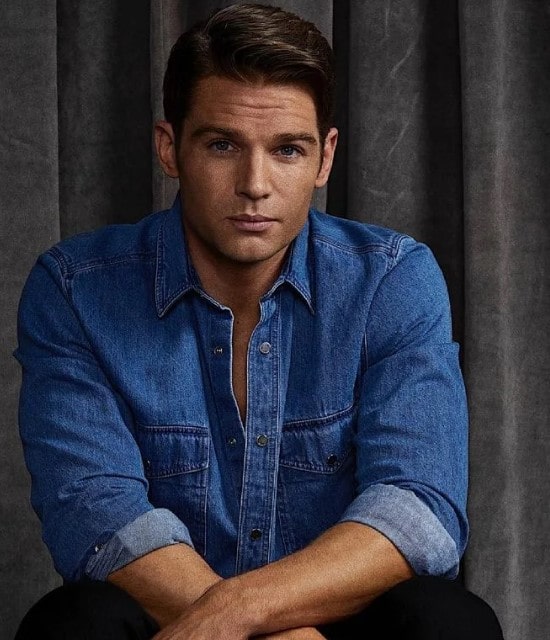 Michael James Vogel is a well-known American actor and model who was born on July 17, 1979 in the United States.

Vogel began his career as an actor in the year 2001 and has since appeared in a number of films and television series. Some of the films and series in which he has been featured are

The Texas Chainsaw Massacre, The Sisterhood of the Traveling Pants, Grind, Poseidon, Blue Valentine, The Help, Bates Motel, Cloverfield, Under the Dome, and The Case for Christ.

During the 2017–2018 season of the NBC military drama series The Brave, he was featured as the main character and played the leading role.

Both of his grandfathers served in some capacity during World War II. One of them was a tank commander who saw action during the Battle of the Bulge, and the other served in the Navy as a Seabee.

Vogel has a brother named Daniel Aaron and a sister named Kristin who are both younger than he is.

Additionally, he earned a degree in 1998 from Cairn University, which is located in Langhorne, Pennsylvania. It was during the early 2000s that he made frequent trips to New York City in order to try out for modelling jobs and acting parts.

Michael James Vogel is a well-known American actor and model who was born on July 17, 1979 in the United States. He is now 42 years old.

His parents, Kathy and Jim Vogel, raised him there. He comes from German ancestry.

Both of his grandfathers served in some capacity during World War II.

One of them was a tank commander who saw action during the Battle of the Bulge, and the other served in the Navy as a Seabee.

Vogel has a brother named Daniel Aaron and a sister named Kristin who are both younger than he is.

Additionally, he earned a degree in 1998 from Cairn University, which is located in Langhorne, Pennsylvania.

It was during the early 2000s that he made frequent trips to New York City in order to try out for modelling jobs and acting parts.

Vogel during the premiere of Poseidon in London in May of 2006.
When Vogel started out, he was modelling pants for the legendary Levi Strauss & Company.

After thereafter, he was given a recurring part on the television series Grounded for Life, which aired between the years 2001 and 2004.

His first role in a film was in the 2003 movie Grind, which was about skateboarding and was released on August 15th of that year. Adam Brody and Jennifer Morrison were also a part of the cast of this movie.

Following that, Vogel was cast in the role of Heathcliff in a reimagining of Wuthering Heights that was created specifically for television and had its debut on MTV in September of 2003.

In the movie, Vogel portrayed Heath, who was opposite Erika Christensen’s character, Kate. The Texas Chainsaw Massacre: Remake, which was released in October of that year and did quite well at the box office, was Vogel’s final part in 2003.

After the cancellation of Grounded for Life in 2005, Vogel made appearances in a total of four films. First, he appeared in The Sisterhood of the Traveling Pants, which was released in June.

In that film, he played Eric Richman, who was the love interest of Blake Lively’s character. His next part was the lead in the independent picture Supercross, which made its debut in theatres in August.

In 2003, Vogel was one of the actors who recorded their scenes for the R-rated dark drama Havoc.

Filming took place in 2003, but the movie was not released until November of 2005. It was not shown in theatres but rather distributed on home video first.

In the film Rumor Has It…, which starred Jennifer Aniston and Kevin Costner, Vogel played a supporting role as the son of Costner’s character. This was Vogel’s final job of 2005.

Vogel during his time with Joint Task Force Guantanamo in June of 2008
Vogel’s first job in 2006 was in the catastrophe film Poseidon, which was a recreation of the 1972 film The Poseidon Adventure.

In this film, he portrays the fiancé of the character that Emmy Rossum plays. The movie had a production budget of $160 million, and on its opening day (May 12), it brought in $181,674,817 at the worldwide box office.

Vogel turned down the part of Angel in X-Men: The Last Stand after being given it, opting instead to star in Poseidon instead.

In the same year, he had an appearance in Caffeine, a romantic comedy, and signed a contract to star in Open Graves, a horror movie that was shot in Spain.

In 2007, Vogel had a role in the horror film The Deaths of Ian Stone, which was shown as a part of the festival titled 8 Films to Die For.

Vogel had starring roles in the neo-noir movie Across the Hall as well as the horror movie Open Graves in the year 2009.

He appeared in the romantic comedy film She’s Out of My League (2010), as well as Blue Valentine and the television programmes Miami Medical and Heaven’s Rain.

Vogel starred as Johnny Foote in the film adaptation of The Help and appeared in the comedy picture What’s Your Number? in 2011.

His most recent role was as Dean on the abbreviated ABC miniseries Pan Am (based on the history of the defunct airline of the same name).

In 2013, he had a role in the comedy Jake Squared, which was directed by Howard Goldberg and starred Virginia Madsen, Elias Koteas, and Jane Seymour, among other well-known actors.

In addition, he had roles in McCanick and the first six episodes of the Bates Motel series. This was the contemporaneous prequel series that A&E aired prior to the release of the novel Psycho in 1959.

Vogel played the role of Dale “Barbie” Barbara on the science fiction drama series Under the Dome, which was produced by CBS and based on the novel of the same name written by Stephen King.

The show was broadcast on CBS throughout the summer months as a summer series; it lasted for three seasons on the network and ended in September 2015.

Vogel was cast in the 2014 romance TV movie In My Dreams, which was produced by the Hallmark Hall of Fame.

His co-stars in the film were Katharine McPhee and JoBeth Williams, amongst others. Vogel was given the role.

During the same year, he had a role in the drama thriller titled “The Boy.” This film chronicles the story of a 9-year-old sociopath, who was portrayed by Jared Breeze in the film.

In 2015, Vogel starred in the miniseries adaptation of Arthur C. Clarke’s novel of the same name, Childhood’s End, which received positive reviews from critics and audiences alike.

In 2017, Vogel portrayed Lee Strobel, the book’s author, in the film adaptation of The Case for Christ, which also included Erika Christensen as a co-star. Vogel has worked with Christensen in a previous project.

The first episode of The Brave for the 2017–18 season aired on NBC on September 25, 2017. For particularly challenging operations, a select few elite military intelligence agents hailing from a variety of service branches are brought together to form a small team.

Capt. Adam Dalton, played by Vogel, is one of the leads in the show. He was a Delta Force operator in the past and is now the communications director for the squad.

His superior is the role played by Anne Heche, who also stars in the series.

Following the conclusion of the first season, the series was cancelled.

Vogel’s casting in the next psychological thriller produced by Netflix and titled “Secret Obsession” was confirmed in December of 2018. The movie was released on the 18th of July in 2019.

Vogel was cast as the protagonist character, David Roman, in the science-fiction pilot for ABC titled Triangle, which was written by Jon Feldman and Sonny Postiglione. The pilot was produced in February of 2019.

In September of 2019, ABC decided against go forward with the project.

In March of 2020, it was reported that Vogel would play a starring role in a new series that would be produced by Netflix called Sex/Life.